Reviewing my most used Every Day Carry (EDC) Swiss Army Knife (SAK) – Victorinox Camper.
Before I started carrying certain tools with me every day, I often found myself struggling to open a firmly sealed plastic box, a beer bottle without breaking the glass, unscrewing bolts and screws or even opening bottles of wine. I often ended up having to use less than ideal solutions such as pushing the cork in the bottle or tightening and loosening screws with keys, which would often damage both the keys and the screws.

Then, I discovered multitools and pocket knives penknives or small folders with extra tools added. Turns out there is a range of those. Some are truly pocket sized things with a selection of useful tools that you can choose from selecting different models. Others are a bit too much for me as they weigh more than a full-size knife and take up even more space.

And if you live in a country such as England, there is the legal issue as well. Many countries will have specific restrictions which will force you to choose tools with blades up to certain length (less than 3 inches in the case of the UK) or/and without a locking mechanism. Unless, of course, you have a valid explanation for having a different blade, and time to explain it in case you were stopped and searched.

I’m not gonna express my opinion on that. I’ll just say that this will definitely narrow your search when looking for an EDC in the UK or Hungary. Out of the ones I’ve come across so far, I like the Swiss Army Knife type tools such as my Victorinox Camper. I have other knives from Victorinox, but this one is just what I need most often. It’s not too big, not too heavy, UK legal carry, and has most things I tend to use at work, on a walk or even when shopping or having dinner with friends.

The good thing about those knives is that there are plenty of them with different tool combinations so you can get the one you find most useful. They may not be the cheapest on the market, but I’ve already tried cheaper brands with very similar tolls. The quality just wasn’t there for me. Of course, you’ll still have to be sensible when using a tool of this size. Something this small will have its limitations of which I talk in the video. 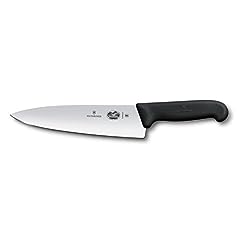 (6534)
For home chefs & professionals. This Fibro Pro chef's knife has been the top choice of both home chefs and professionals alike. Expertly crafted with a tapered stainless steel edge that cuts with ease and efficiency. Fit for all tasks. Designed to ha... (as of October 24, 2020 - More infoProduct prices and availability are accurate as of the date/time indicated and are subject to change. Any price and availability information displayed on [relevant Amazon Site(s), as applicable] at the time of purchase will apply to the purchase of this product.) 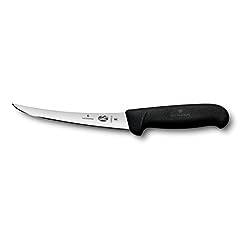 Versatile de-boning tool. Trim or remove meat from the bone with ease. This knife's pointed tip easily pierces meat while the curved-edge allows for smooth, clean cuts close to and around the bone. For delicate & thick cuts. Thick meats like beef or ... (as of October 24, 2020 - More infoProduct prices and availability are accurate as of the date/time indicated and are subject to change. Any price and availability information displayed on [relevant Amazon Site(s), as applicable] at the time of purchase will apply to the purchase of this product.) 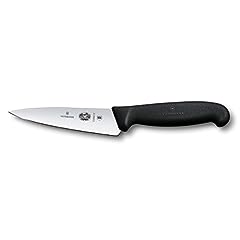 FOR HOME CHEFS & PROFESSIONALS. This Fibrox Pro Chef's Knife has been the top choice of both home chefs and professionals alike. Expertly crafted with a tapered stainless steel edge that cuts with ease and efficiency. FIT FOR ALL TASKS. Designed to h... (as of October 24, 2020 - More infoProduct prices and availability are accurate as of the date/time indicated and are subject to change. Any price and availability information displayed on [relevant Amazon Site(s), as applicable] at the time of purchase will apply to the purchase of this product.) 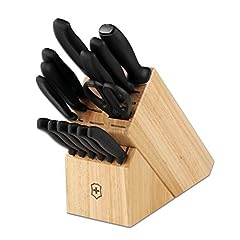 A COUNTERTOP ESSENTIAL. This 15-piece cutlery block set contains: a paring, utility, steak, chef's, Santoku, and bread knives -- including a honing steel, kitchen shears and hardwood block. An accessible storage solution for home-chefs and profession... (as of October 24, 2020 - More infoProduct prices and availability are accurate as of the date/time indicated and are subject to change. Any price and availability information displayed on [relevant Amazon Site(s), as applicable] at the time of purchase will apply to the purchase of this product.)

+airgunplanet I think it would be a bit too bulky.

Where can I buy such big fire starter? 🙂

Great video, I just bought one online as an impulse buy without checking out any reviews because of the price and it has more than enough tools for my EDC needs. This video just confirms for me it is great tool, now I just need to receive it…. Keep up the good work.

I’ve had this knife for about 10 years now. It sucks. I got it for free is all. I’m in the US so if there’s something better than this, get it.  I mean the actual idea that the knife doesn’t lock is a terrible design. And it’s dull. Useless, except for the other stuff.

I have a Tinker joined with a Classic SD by a lanyard and I like it for every day stuff but I definitely wish they had better edges. All I did was quickly pop the safety to a BIC lighter off and it bent/folded the edge of the knife over. I also tried the spine on a ferro rod (the knife’s spine) out of curiosity and it took off the finish actually and the knife has blackened indents now. Very minor and wont wash off so it’s the blade itself but yeah. Still like them, just wish they used slightly better metal or treatment.

Never baton with this blade lol. NEVER…if you want to snap it off and have it come back and cut your eye, sure.

why baton a twig

I carry the SAK Hiker edc. It’s hard to beat with all it’s functions.

Batoning with any knife is silly, and all it does is show that the owner learned all he “knows” from YouTube, which isn’t much.

As for the steel, I’ve seen better, too, but if you know what you’re doing, this steel will work as well as the best steel made. No knife should ever be allowed to get dull, regardless of what kind of steel it uses. Only a complete amateur has a dull knife. A dull knife means you lose a lot more metal than you should when you sharpen it again, and means you may be caught without the sharpness you need in an emergency.

You should be carrying the tools you need to keep a knife sharp, and you should use them before the knife actually gets dull. I carry a ceramic rod, a strop, a fine sharpening stone, a small piece of green stropping compound, and a small bottle of sharpening oil, all in a pouch that’s two inches wide, three inches long, and an inch thick. t the first sign that the blade is less than razor sharp, I stop and take care of it. The honing rod usually does the trick, and if not, the strop will.

real woodsman’
s pocketknife always has more than one blade. Two is minimum, and three, such as on a Stockman, is perfect. The Stockman, with a clip point, a sheepsfoot, and a pen blade, is the best small carving knife there is, and even many, many professional woodcarvers use it, preferring it even over a carving jack.

Stop worrying about “best” steel. Many of the “best” knife steels in the world are horrible choices for a working knife. A steel that holds an edge a long time is great, until you have to sharpen it. If this happens in the wild, you may be in trouble. Most steels do not hold an edge because they’re hard, they hold an edge because they have very high abrasion resistance, which is not the same thing. The same abrasion resistance than makes an edge stay sharp for a long time is also what makes it equally difficult to sharpen.

It shouldn’t take more than two minutes to sharpen a knife, or more than thirty seconds to hone and strop it. If it does, the steel is a poor choice for a wilderness knife. Or the user need more practice learning how to take care of an edge.

Best steel? Best for what? No steel is the best for everything. For carbon steel, the best in the world is 1095CV. It’s far better than O1 or O2 steel, better than CPM-154, an infinitely better than D2, if you want to count D2 as a carbon steel. When used on a working knife, or on a wilderness knife, nothing is nearly as good as quality 1095CV. knife. It’s not as good for other tools, but it can’t be beat for a knife. Yet on paper, all these other steels are “better”.

For stainless, the best knife steel depends strictly on what the knife will be used for. If it’s a display knife, the steel doesn’t really matter. If it’s a seldom used knife, one you take on that three day trip once a year, then premium steel such as CPM-s30V, is fine. But for a working wilderness knife, no, CPM-s30V is not a wise choice.

I’d far rather see someone come into wilderness survival training camp with cheap Chinese stainless steel, which is basically 440a than with D2 or s30V. I’d far rather see them come in with 1095CV because carbon steel can make the difference between living and dying in an emergency situation, but if it has to be stainless, the “best” steels on paper are not best in any way when it comes to real world use in the wild.

Where did you get that paracord lanyard from?

Looks like you still couldn’t get into that shed, my man

Probably not the smartest thing but I would put a wicked edge one an sak if I had one.

Great review of a great little tool 🙂
Thanks

Best review Ive seen. Damn… Microscope ? Testing ? What else do you need ? 😀 Keep it up, man !

I’ve lost count on the the number of SAKs I have. I just have to say the saw is a really nice thing to have, whether its this size or the larger 110 mm size. My personal favorite
is my custom Farmer with pocket clip.

Great review Simon!! I might buy one of these and or the Hiker model! I think the saw is very useful as well! ~Mitchell